3D modeling of cultural heritage: Where are the Americans?

On 20-23 June 2016 I attended a NEH Advanced Topics in the Digital Humanities Summer Institute (DHSI) exploring the theory and practice of 3D modeling of cultural heritage sites. Held this year at UCLA, the institute was a follow-up to one held the year prior at the University of Massachusetts -Amherst. I found the institute to be particularly useful for connecting me with other experts and practitioners in the field of 3D cultural heritage development and was encouraged to see that, with the increased interest in virtual reality in higher education, that many of the participants were also looking at ways to transition into this growing field. 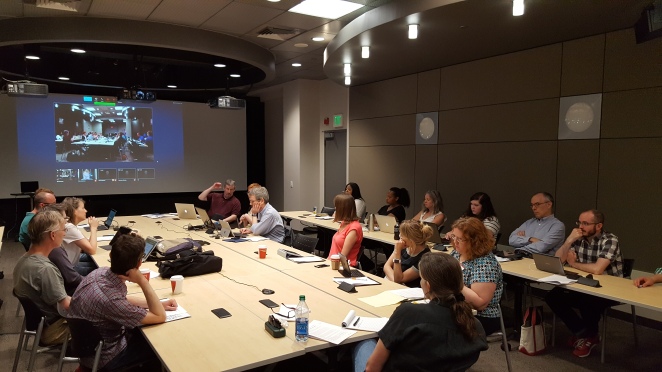 Getting down to business in the UCLA Visualization Portal

Perhaps the most eye-opening aspect of the whole institute was the contact I had with my European and Canadian colleagues. Through interaction with these colleagues and the institute readings, I became aware of  the London Charter, the Seville Principles, the CARARE metadata schema and mapping, and the 3D-ICONS project. It seems that most of the important work and standards are coming out of Europe at the moment, with institutions in the United States focusing more on computational approaches to textual analysis than developments in 3D cultural heritage visualization and virtual archeology. There is certainly exciting work being done in these areas (e.g., Digital Karnak and MayaArch3D to mention a few), but nothing nearly as widespread and well-articulated as in Europe. Hopefully this will change in the future as 3D and virtual reality development becomes more mainstream on American institutions.

Originally I was planning to present work I had done for the last year on a 3D simulation of the medieval Helfta convent. The inability to find source material to base development of the 3D models on, in addition to the inaccessibility of the site for people living outside of Germany, prevented me from moving this project forward. These concerns, I found out, were shared by many of the American institute participants working in the fields of European literature or history. Instead, I was able to present my work on the Uncle Sam Plantation, a 19th-century Louisiana sugar plantation:

For this project I used floor plans and elevations from the Historic American Buildings Survey (HABS) to guide the development of 3D assets, and the Unity API to program simulation functionality. The object-oriented C# code I have developed for the simulation reads in quest data from a flat file database, applies this data to resources in the simulation, allows player interactivity with these resources through raycasting, and maintains the simulation state in computer memory. I developed the 3D models in SketchUp as I was using this software for another project, but in the future I am planning to get back to Blender since it is easier to to apply textures to models in this software. I will describe my C# code development in a later blog post.

In any case, working with this AHBS documents made me aware that there are many cultural heritage sites in the United States that could certainly be the subject of a robust 3D or virtual reality development project, and that there is really no reason why American researchers should be falling behind the Europeans in developing and curating content in these areas. Need ideas for a 3D cultural heritage project? Check out the HABS site.

Finally, while at UCLA I had a chance to take a peek into Boelter Hall, Room 3420, which was the birthplace of the internet in 1969:

Originally there was just a handful of people in the room at the time when a simple message was sent over ARPANET to the Stanford Research Institute. Now there are millions of people on the internet with all sorts of complex data being sent back and forth. What will technology look like 47 years from now and how will it impact higher education?