I have always liked projects as a way of organizing and directing activity. They allow me to set personal goals, to measure progress towards this goal, to learn new technology skills along the way, and to create new knowledge through experimentation and analysis of the product. So, after a few years of not having any long-term research and development project to guide my efforts, I am excited to finally have something substantial to chew on for the coming year.

The idea for my current project, which I described in rough outline in an earlier post, really came together for me at a recent NEH Advanced Topics in the Digital Humanities Summer Institute at the University of Massachusetts Amherst. I found the lively discussion between the institute participants especially useful, and I was relieved to hear that many of us in the field of digital humanities are facing similar institutional and project challenges. Particularly interesting, I thought, was the challenge of presenting a richly documented 3D environment (such as the Oplontis Project, the Colombian Exposition, and Digital Karnak) in an engaging manner that “pulls” a visitor through the space. All of these projects had detailed 3D models and a wealth of meta- and paradata regarding the historical architecture they represented, but a narrative that wove all this information together into a cohesive and engaging whole — so I thought — was missing. Coming to these excellent projects with a background in digital game-based learning (DGBL), it seemed to me that gamifying them would be the next logical step.

Based on these institute discussions and observations, I though it would be a good idea to develop my Digital Helfta project in two stages: (1) create a detailed 3D environment of the 13th century German convent based on archaeological finds and site research; and (2) eventually gamify the environment by creating a story that merges virtual spaces, historical texts, and spatially-situated religious practices. I presented this idea at the institute project lightning round (My presentation begins at 7:27):

Since the slides for the presentation are not really visible in the video, I have uploaded them here: 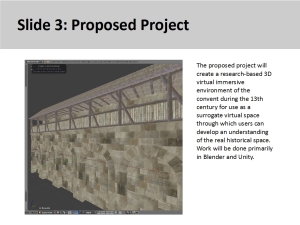 Renovation work on the Helfta convent began in 1998, and apparently some archaeological digs were conducted at that time around the convent. Hopefully there are some plans of the fieldwork that was done; I would be especially interested in finding plans detailing the medieval foundations of the convent. I have been able to locate a book on the cloister landscape of Saxony-Anhalt, so perhaps my next step should be to reach out to this author and inquire about possible project resources and eventual collaboration.

In the meanwhile, I’m also thinking about the story that will eventually lead visitors through the 3D environment. While rereading Tobin’s translation of The Flowing Light of the Godhead, I came across this sentence that gave me an idea: “Somehow a copy of Mechthild’s work in the original Middle Low German fell into the hands of a secular priest in Basel named Heinrich of Nördlingen, confessor and spiritual advisor in many convents nearby” (p. 7). This sentence seems, at least to me, to be the start of a very interesting story. How did the book move from Northern to Southern Germany? Could a nun or beguine have been tasked to find out more about Mechthild and her unusual book for Heinrich, or another historical figure? What would she need to do at Helfta in order to get closer to Mechthild? How would she obtain a copy of the book and understand what is written in it? Perhaps the game could begin with a letter that is delivered to the player: “Dearest sister, I have recently heard of a most unusual and wondrous book at the Helfta convent and am desirous to obtain a copy. I am hoping that you will be able to help me.”

3 thoughts on “First steps on a new 3D project”