Digging deeper into the design of tutorial room for the German VR game at last week’s team meeting, we came to the realization that we need to align the training objectives of this room more closely with the activities that a player would ultimately need to perform in the game. These actions include: (1) teleporting in the space; (2) interacting with the buttons on the buttons on the hand controller (e.g., accessing a German dictionary or inventory); (3) looking around and orienting one’s self in the space; (4) interacting with objects (e.g., picking them up, examining them, putting them down); (5) putting objects into the inventory system; and (6) taking objects out of the inventory system. Other actions may need to be added as the game is developed and we evaluate feedback from user prototype testing. 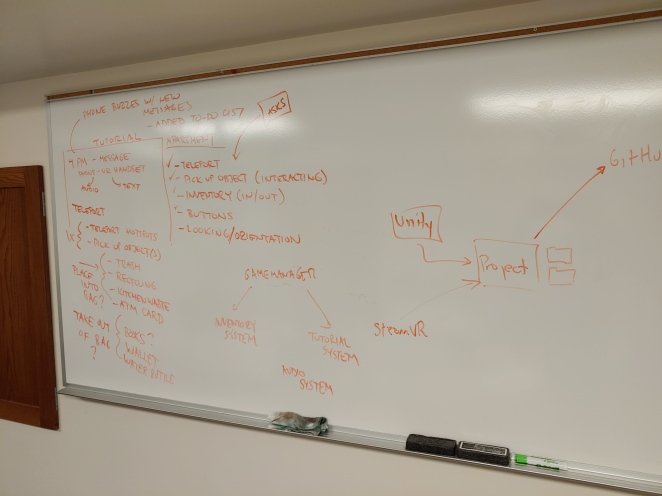 Inclusion of the new training objectives modified the narrative of the tutorial room:

We realized that creating the tutorial room will be a lot of work for the team, perhaps enough to keep us busy for the full academic year. 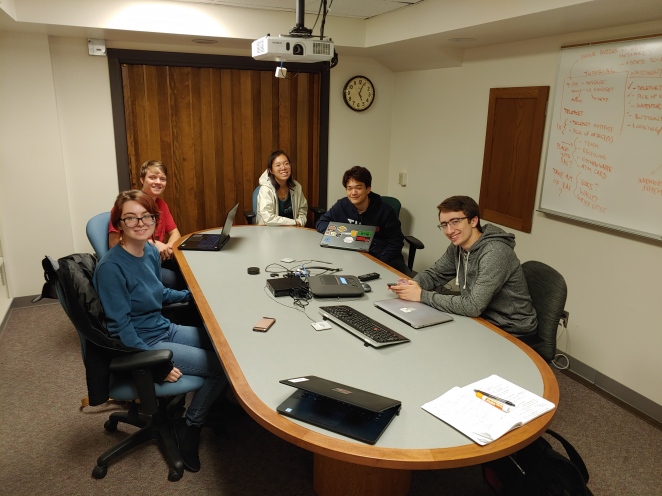 To help us generate ideas on how other VR experiences are structured and address similar design issues, we will use our next team meeting (on 10/17/19) to play through these experiences and take notes on how we react to them, judge their effectiveness, and apply aspects of these experiences to our own game. After this is done, we’ll have a bodystorming session to flesh out the experience even more and discuss the finer design details that will undoubtedly emerge when we act out the experience, and then we’ll begin whiteboxing the experience.

In the past we were looking at using VRTK v3 our Unity plugin for developing VR content for the Grinnell College Immersive Experiences Lab (GCIEL). With the release of SteamVR v2, however, VRTK v3 will no longer be supported and a new release (VRTK v4) is currently in beta. Unlike v3, which was documented very well, v4 is still rough around the edges and is missing a lot of documentation. So that we don’t waste time waiting for this documentation to be developed, we are moving all GCIEL projects over to SteamVR v2. This still will allow us to develop for all the major VR devices, including both the Oculus and Vive.

SteamVR v2 is a major rewrite of the v1 release, which was poorly documented. I’ve been testing SteamVR v2 this past week, seeing if I could get something up-and-running, and I’m happy to say that even I (with my lower-level programming skills) was able to do this. I found these resources to be most useful:

I anticipate that a lot of code from all the projects currently being developed in GCIEL can be recycled for other future projects. So that we don’t constantly reinvent the wheel, I hope to take frequently used code, insert it into a Unity demo project similar to the SteamVR v2 example scene (Assets/SteamVR/InteractionSystem/Samples/Interactions_Example), and upload the project to the GCIEL Toolkit repo. 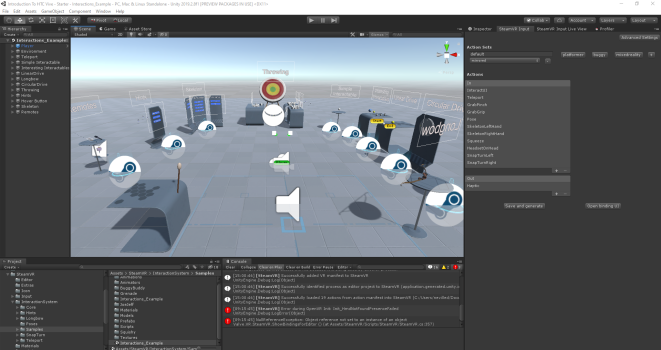 Screen capture of the SteamVR v2 example scene – hope to create something similar for GCIEL use.