I have been working these last few days on tweaking the game interface and writing the code the will provide game functionality. I’m happy to report that the code for managing the points and health in the game are all finished, as seen in this screenshot:

Every minute, the code will deduct one health point and play a small audio file (a “ping”); players will be able to get health points by purchasing something to eat or picking up a first aid kit. When players gain health points, another sound file is played. The game points work on the same logic. Once I get the money interface finished (what you see in the screenshot is just a place holder), I will get to work on developing the interactive objects that the player needs to pick up and recycle (or throw away).
I’m also happy to say that coding the game is going much more smoothly than I thought. Progress in this area was helped on tremendously by code I grabbed from the AlmostLogical blog. Once I got my mind wrapped around the code, tweaking it for the game was very straight-forward. Here’s a screenshot of the code: 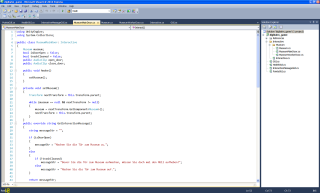 I’ve been really impressed with the Unity code libraries. Some game functionality, which I thought would take lines of code to write, are accomplished with one-line function calls. Hats off to you, Unity.
On a side note, an interesting report on the NPR website detailing how video games increase brain power and multitasking skills. Apparently, computer gamers perform better than non-gamers on certain tests of attention, speed, accuracy, vision and multitasking. Who would have thought?