For the last week, I have been working on getting my Blender models imported into Unity, installing a skybox, and putting some of the first person interactivity in place. Fortunately, with Unity much of this is simply a questions of dragging and dropping the appropriate pre-constructed assets into the game project. Here’s a screenshot of what I have developed so far: 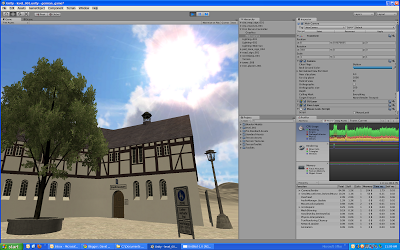 And – if you are interested – here’s a video of the same thing, with some additional commentary on the game models and perceived benefits for second language acquisition courses:

Since FRAPS doesn’t work with Unity, I’m back to using Camtasia to do my screen recording and, as a result, some choppy video when recording the game sequence. I’m going to have to find some software that will do screen recording for games, preferably something free. Any suggestions?
While looking through some old screen recordings of earlier DigiBahn Project development, I came across this video:

At this point of project development (about one year ago), I was working with seven students from German, digital art, and computer science to get something off the ground. As we were not in agreement with what platforms to use, we decided to mock something up with an Oblivion mod. As some of the students have graduated and gone on to pursue advanced degrees, I have been left to do all the 3D development, programming, and instructional design on my own. It’s been a steep learning curve, but I’ve certainly learned a lot and the project is moving forward at a very decent pace, as a comparison between these two videos will attest.
The DigiBahn Project