Earlier plans for the game I am developing included creating an exact mock-up of a real-world German space, specifically Stuttgart Central train station, as the game environment. My thinking at the time was that the game should expose a player to virtual spaces that were as authentic as possible so that the learning that takes place in these spaces would also be authentic – or “real” – as possible. For some reason or another, I was stuck on the idea that a video game is only legitimate insofar as the spaces it represents are based in the real world. Not only would this help in transfer of mental schemata, I theorized, but it would also go a long way in removing the stigma that video games were in someway separate from reality and, by extension, therefore useless in an instructional setting.
Problems emerged, however, when I realized that many real-world spaces just don’t lend themselves very well to a video game environment. Sure, games can be layered onto real-world space (such as geocaching does), but games generally involve the creation of what Huizinga describes as a “magic circle” that separates the real from play. Real-world spaces are generally simply meant to be functional, and sometimes they do a poor job of even that. The idea of making the game environment to be as “authentic” as possible was finally put to rest after a discussion with Anne Balsamo at the Humanities Gaming Institute a few months ago, where she asked me (roughly paraphrased): “And why would normal instruction in the classroom be perceived as more authentic?”
Her comment led me to realize that what I normally do in the classroom is also, at its most basic level, also a personal interpretation of what I perceive to be authentically German and that I had unrealistic expectations of 3D digital game-based learning environments. Just because the environment appears to me more real than, say, a textbook does not mean that it really is. There is also a large degree of personal interpretation that creeps into the creation of the game space. So, I decided to create a game that had playful virtual spaces that emulated German sociocultural spaces, instead of a game that used real German sociocultural spaces and forced them to be fun. The latter, I thought, seemed to be a recipe for disaster (or, at the very least, a potentially boring game). Thus the imaginary town of Bad Oberdinkelheim came into being: 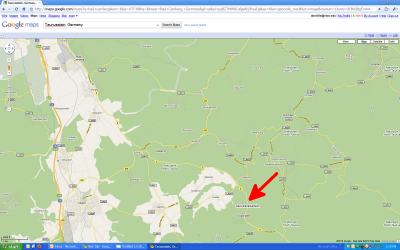 The development of the town will be influenced by the the surrounding area: The Romans were indeed this far north and buildings in this area do manifest a certain type of architecture. The game, in sum, is a verisimilitude of the real. How these game spaces play and feel, however, will be largely informed by theories formulated by game studies, new media, and digital game-based learning. It will, at the very leasts, be interesting to see what comes of the whole project in the end.
Finally, looking at the recent video I made for the last blog posting, it occurred to me that the video settings were all whacked-out. I specifically did not like the black letter boxing on either side of the screen. So, here’s another attempt at the same thing:
Although this time I think I did less of a good job explaining why I think 3D video games are good for second language acquisition. Oh well. It’s hard to talk, think, and walk around a 3D space at the same time. In sum, my hypothesis is that such video games lead to more efficient and effective learning by helping students perform better on assessments in certain areas, retain what they learn longer in their minds, and develop mental schemata that can more easily be transferred from simulated virtual environments into real-world environments. If you have any questions, please do not hesitate to contact me via email.
This may be my last posting for a few weeks. The semester is starting up in a few weeks and I need to get my classes, and a conference paper on webcams in the classroom, organized. IN the future, I will be doing the coding for the game, so we’ll start to see how the game objects, player interactivity, and learning objectives all come together.
The DigiBahn Project