FRAPS and Feedback from The Modern Language Journal

On account of the recent holidays and an unfortunate problem with my computer’s motherboard, I haven’t been blogging as much as I would have liked. Now that the computer problem is resolved and the powers that be have turned the heat back on in my office, I am once again in full production mode. A new year ahead of me and new ideas to explore!
I just finished reading Nitsche’s Video Game Spaces and Gee’s What Video Games Have to Teach Us About Learning and Literacy. I have started the latter on numerous occasions, but never really got around to finishing it. So, as the computer was in the shop, I went back to the library, checked it out, and finally read it cover to cover. I’m now on to reading Juul’s Half-Real and am about half-way (no pun intended) through it.
Based on what I have read so far, I’m thinking about radically redoing the level in which I insert the player into the game. The main problem, I think, with the prior level design was the layout of the level itself, which might lead to a lack of player guidance and direction. It occurred to me that a real-life pedestrian zone is functional in that it creates an environment in which people can walk around and explore, without having any clear objective or destination. We want people to stay and shop, not quickly move through while looking for something else. A virtual gamespace, on the other hand, will have specific objectives and instructional goals, and the player/learner will need to move through this space in order to maintain a sense of momentum in the game. We want players to move forward in the game and continue learning, but while simultaneously maintaining a sense of the real pedestrian zone that allows limitless lateral movement and exploration. And it has to be fun. A tricky design task, no doubt. I have some ideas of what the new level should look like and will post these later.
Looking for a way to create screen captures of gameplay for my current book project on digital game-based learning for second language acquisition, I came across FRAPS. It’s shareware, so some of its functionality is limited unless you decide to purchase it, but it makes documenting gameplay so much easier than taking screenshots of a game in windowed mode. I’ll certainly be using this a lot as I work on the book. It works with programs running on OpenGL or DirectX, which means that it also makes nice screen captures of Blender. Here, my recent work on a game model: 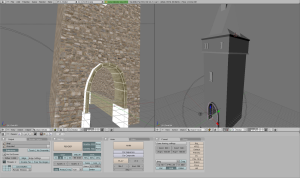 Finally, I just found out that the article I submitted to Modern Language Journal was rejected. This is what they had to say:

This is an insightful and well-argued paper on the design features and potential value of gaming environments for language learning. It makes a distinct contribution in this area. Although we have published in this area recently (most recently the 2009 Focus Issue), as the author notes, we do not feel that The MLJ is the appropriate venue for this paper. The MLJ readership would be interested in implementation and empirical investigation of the uses and effects of such games, rather than in the complexities of the design. While some designers and CALL specialists no doubt consult The MLJ from time to time, they are more likely to focus on specialized technology journals. I strongly recommend the author to approach one of the technology or CALL oriented journals, e.g. LLT, ReCALL, System.

I am very thankful for the positive feedback and high regard of my scholarship. On the other hand, what threw me was the emphasis on implementation and empirical investigation. After all, somebody has to make these types of learning environments and without initial and well-formulated inquiries into how to build them, there would never be anything to evaluate anyway. So, I added some extra references to research I recently read and sent it off the next day to The Foreign Language Annals. We’ll have to see what comes of it there.
The DigiBahn Project