I spent Saturday afternoon playing with the procedural textures that ship with Blender to create the water pipes on my recent project, the fountain that will go in the center of the pedestrian zone. Thinking about how these pipes should look like, I thought that they would have been exposed to the elements for some time and would exhibit natural pitting and wear. As they are in a damp environment, they would be slightly mosit and reflect light, but not too much as to be distracting. The black iron would have slighter areas of grey highlights. After tweaking the settings and numerous test renders to get the texture just right, I came up with the following:

I have already grabbed a sandstone texture off the Internet that in the coming days I will apply both to the pillar in the center of the fountain, the basin itself, as well as to produce a bump and specular map. When I’m all finished, I will create a turntable render and post it here. I’m particularly pleased with the reflection off the water and the slight surface distortion. We’ll just have to see how the remainder of the project develops.
And here is a screen capture of the complicated Blender interface, which is gradually becoming more manageable: 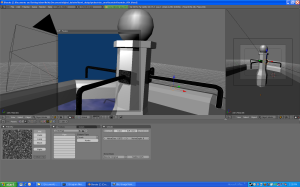 The large image size (1920 x 1200) is the native resolution of my computer screen. Next time: Applying the stone textures!
The DigiBahn Project