It’s been a long while since I last posted an entry on this blog. The start of any semester is always difficult, and this last was no exception. Between course preparation, grant submissions, and other sundry tasks needing completion, I’ve been rather busy. To get back in the swing of things, I’ve decided to post excerpts from my recent NEH Digital Humanities Start-Up Grant proposal. Much of what I drew upon to draft the grant can be found in prior articles addressing the topic of 3D digital game-based learning for second languages acquisition, although the process of writing the grant – I think – sharpened my focus a great deal and made a few things clearer to me, such as the role of narrative structures as a means of transmitting situational linguistic and cultural knowledge. Anyway, here’s an excerpt of what I sent off:


4a. Environmental scan
The research and development of 3D-DGBL environments for SLA is still in its infancy, with most advances coming from private industry although work in the academy is quickly gaining momentum. Alelo Inc., for example, produces a customized series of 3D interactive video games and simulations that are widely used by the US military to train its personnel in Arabic, Dari, Pashto, and French. The academy, on the other hand, tends to rely primarily on commercial off-the-shelf (COTS) games, the modification (or “modding”) of these games, and 3D virtual reality worlds such as Second Life as instructional platforms for SLA. Although COTS games can be used to teach a second language, they run the risk of conveying false cultural information. Foreign releases of the popular strategic life-simulation game The Sims, for example, are linguistically and culturally disjointed in that they simply layer the second language over gameplay based on a US West Coast suburban lifestyle. Modifications of COTS games can also be limited by copyright restrictions, and purchase of the original game is usually required to play any derivative modification. Furthermore, the effort and time required to modify a COTS game to the point that it is culturally accurate and pedagogically viable speaks powerfully in favor of developing a custom 3D-DGBL environment from the beginning. Finally, 3D virtual worlds have proven popular in SLA and open source projects, such as the synthetic immersive environment (SIE) Croquelandia, which is used in intermediate Spanish courses at the University of New Mexico, are beginning to gain traction. The recent spate of virtual world closures (e.g., Teen Second Life), however, raises the question of whether this technology is ideal for long-term development as an instructional platform. The open-ended and unstructured gameplay of virtual worlds can additionally be difficult to manage and assess in an instructional setting, and the pragmatics of these worlds may not necessarily be those of the target language and culture. While 3D video games commonly rely on a predefined story or narrative arc to structure gameplay, virtual worlds emerge out of unpredictable, unscripted, and complex sets of interactions among their denizens and the unique communicative norms of the virtual worlds themselves. As these norms can potentially be overwhelming for beginning students of a second language and culture, more research must be conducted on how the narrative structures of standalone 3D-DGBL environments can be used to scaffold the learning process.

4b. Enhancing the humanities through innovation
Situated cognition theory, sociocultural approaches to SLA, and current discussions in video game studies point to ways in which the narrative generated by 3D-DGBL environments may be leveraged to help teach second languages and cultures. Situated cognition theory posits that people apprehend reality and transmit knowledge by means of narrative structures. Essentially subjective “stories” of a perceived reality, these narrative structures are not monolithic and unchangeable, but must be continually validated, augmented, and corrected by the communities of practice occupying specific sociocultural spaces. Current sociocultural approaches to SLA focus on this intersection of the personal and the communal, with particular attention being paid to the linguistic artifacts that emerge there. Underlying these approaches is the assumption that language acquisition is a process occurring not only in the head of the individual language learner, but also between the heads, so to speak, of people sharing common linguistic and cultural systems. This insight is important for SLA as it suggests that narratives shape specific social, cultural, and linguistic contexts; that they transmit the core values of the communities of practice inhabiting these contexts; and that they are ultimately negotiated on a personal level based on the identities, needs, and unique subjectivities of the people seeking entrance to these communities. Each person provides a “plot,” as it were, to interpret these dominant narratives, which in turn generates a life “story” that can be evaluated as an independent artifact of this interaction. Many video games have a similar core dynamic. Presenting simultaneous multimedia output that is shaped by player interactions with the game world, these games generate narrative that is highly immersive and necessarily participatory in nature. The figured worlds that unfold through these interactions, each one being slightly different based on player input, performance, and personal preference, are a direct result of players feeling their way through the contours of the game world on a physical, mental, and emotional level and, as a result, form a story that is as unique as the players who interact with the game.

The DigiBahn Project will be developed at this intersection of narrative as a form of situated knowledge, narrative as an artifact of intercultural and interlinguistic activity, and narrative as the product of a figured digital world. Informed by these complementary theoretical approaches, the project will prototype a 3D-DGBL environment for teaching the German language in specific sociocultural contexts to advanced high school and beginning university students. Underpinning project development is the instructional proposition that immersion in a 3D-DGBL environment will allow players to create narrative structures that they themselves configure through interactions with the game world and which, in turn, configure players as new members in a simulated community of practice. A corollary of this proposition holds that these narratives can then be transferred out of the game world in order to help players navigate and make sense of real-world sociocultural and linguistic contexts. 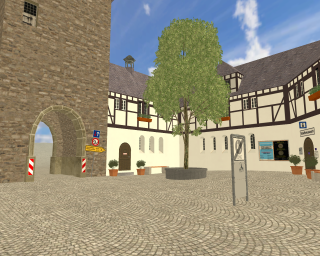 Screenshot of gameplay from The DigiBahn Project
Towards these ends, the proposed project will develop one level of standalone 3D graphic adventure game for both PC and Mac platforms requiring players to navigate a virtual German pedestrian zone and train station while meeting specific instructional goals such as using recycling and trash containers, operating a foreign automatic teller machine (ATM), purchasing a telephone calling card, interpreting departure and arrival tables, finding the appropriate track for departure, and interacting with non-player characters (NPCs). Answering calls made by the Modern Language Association in its Ad Hoc Committee on Foreign Languages Report to revise and revitalize the teaching of second languages and cultures by means of new technologies and innovative instructional approaches, the project will look for specific ways in which 3D-DGBL environments can: (a) engage a wider range of students in the SLA process through challenging and meaningful gameplay; (b) align with SLA learning objectives and assessment strategies; (c) function as a gateway to upper-division cultural studies and language courses; (d) recruit high school students to second language and culture courses at the university level; (e) promote learning through the development of transferable mental schemata and situated sociocultural knowledge; and (f) foster deeper translingual and transcultural reflection.
The DigiBahn Project