Since I started using Blender, I have been using GIMP to make my bumpmaps. Usually I just took the colormap and did the following to it:
Then I would import it into Blender in its own texture channel, map it to the rendered normals, and call it good. The problem I have been encountering, however, is getting different quality of bumps, so to speak, on the same bumpmap.
This problem became especially apparent as I was modeling the upper floor of Building A, an older exposed timber work structure. How would the beams look – well, like wood beams – and the stucco more smooth? Then it occurred to me that, just like I make the colormaps in GIMP using layers, perhaps I should also try to make the bumpmaps with layers, too. And this is what I got: 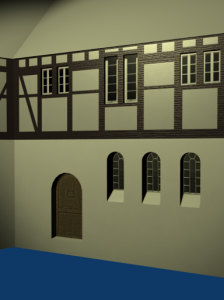 Although I still need to work on the texture for the beams a bit – the wood grain runs (strangely) in the same direction for all of the beams – I am pleased with how it was possible to make a distinct contrast between the strongly-grained timbers and the smoother stucco. I think that I will revisit the bumpmaps for all the models I have developed thus far and tweak them bringing them into Unity3D.
Update: And here is a quick render of the model with a new and improved bumpmap:

Looks a lot more interesting and realistic, although for complete realism I suppose that I would have to check out a book on how to construct exposed timber work houses in Germany. Something else for my “to-do” list I suppose.
The DigiBahn Project

2 thoughts on “Layering the Bumpmap”